As you may or may not have noticed, FTWTW went on a brief (and largely unintentional) hiatus. My last real post was over a month ago. I got really sick, then I went on vacation, then it had been a couple weeks and I started stressing myself out about the need to get a post written and it just sort of got away from me.

Why am I telling you all of this? Well, first of all, if you’re someone who follows my blog, I’m really sorry. I didn’t mean to disappear on you. Second of all, it brings me to my next post, which is… 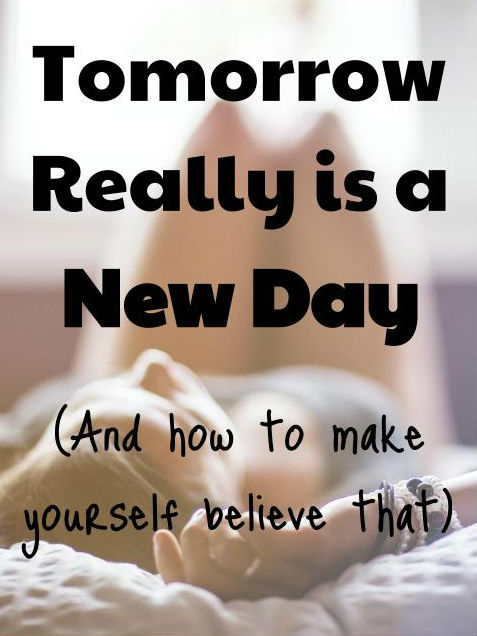 I know you’ve had that day. You know, the one where you had eighteen things on your To Do List and only managed to accomplished two and a half. The day where you started out vowing to eat healthy and go to the gym and instead you polished off an entire package of Oreos and binge watched Say Yes to the Dress. Or maybe you swore you were finally going to get started on that big project that’s been overwhelming you for months (cleaning out your closet, for instance), and instead you played Candy Crush for four consecutive hours.

I don’t know about you, but when I have a day like that, I beat myself up so much that the guilt and shame I feel about it is worse than not getting the thing accomplished in the first place. In reality, the fact that I didn’t start cleaning out my closet today just isn’t that big a deal. No one died, nothing bad happened, I’ll just have to start it another day. But my brain has different ideas. My brain uses that failure to follow through as evidence that there’s something wrong with me. I’m lazy, I’m unorganized, I don’t manage my time well, I’m a slob — there is no shortage of nasty things my brain can turn that into.

Does anyone else’s brain do that to them?

This isn’t exactly a foolproof method, but here’s what I started doing to fight off those thoughts. I sat down after a day where I laid on the couch for six hours and watched TV instead of doing anything productive, and I struggled to come up with four different mantras to repeat to myself on days like that.

It might sound a little cheesy, but by repeating these things to myself over and over, I can usually pull myself out of that nasty shame spiral.

You can use mine if you want, or you can come up with your own. Either way, write them down. Don’t worry, I’ll wait…

Now that you have your mantras written down, you can either post them somewhere visible or stash them somewhere safe. Just make sure that they’re easily accessible when you start to get sucked into that shame spiral. Read them (out loud) over and over again when you start to get down on yourself. It might sound silly, but hearing yourself say those things — even if you don’t believe them right away — can really help.

At the end of the day, you have to remember that you are so much more than the sum of your bad choices for the day. It’s okay to rest and veg out when you need it. It’s okay to eat like crap and not workout every now and then. You’re going to be just fine, it’s just a question of convincing your brain of that.

As always, let me know how you’re doing via Facebook, Instagram, Twitter, or via email at findingthewaytowell@gmail.com. Keep fighting the good fight, and take care of yourselves!